“The best way to predict the future is to invent it.” Alan Kay

• Esta Behind the Scenes (USA)

Richard’s parents were Marjorie and Gordon Pilbrow. Gordon was British Sabre Fencing Champion between 1934 and 1948 — and a member of the British Olympic Team in Berlin and London, His first wife Viki Brinton was a partner in the early days of TP. Their children are Abigail, a potter (grandchildren Ez, Diggory and Louie) and Fred, an architect in London (grandchildren Solomon and Otto). In 1974 he married lighting designer Molly (née Friedel). They have a daughter Daisy, who works as an Agile Coach for Spotify in Stockholm, Sweden.

In 1982, Richard received an award from the United States Institute for Theatre Technology (USITT) for "his many years contribution to the art of lighting, as designer, entrepreneur and consultant in both England and America," and a Distinguished Life Time Achievement Award from the USITT in 1999. In 2000 he also received from the Association of British Theatre Technicians (ABTT) their annual Technician of the Year. He served as Director-at-Large on the USITT Board from 2000-2003 and again from 2003-2006, and was elected a Fellow of the Institute in 2001 for “His truly astounding contribution to the theatre and the work of the Institute”. Mr. Pilbrow has lectured and written articles extensively, giving master classes on Stage Lighting and Theatre Design at the VII Festival Iberoamericano de Teatro de Bogata 2000 in Columbia and in Prague for PQ2007.

Richard was a co-founder of the Association of British Theatre Technicians (ABTT), the Society of British Theatre Designers (SBTD), the Society of Theatre Consultants (STC), the Association of Lighting Designers (ALD), and the Theatre Projects Trust — LAMDA Stage Management and Technical Theatre Course. He is the Honorary Chairman of Light Relief the UK Registered Charity to support those in need in the entertainment lighting profession 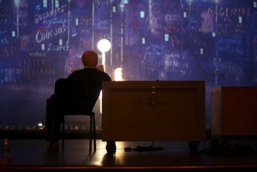